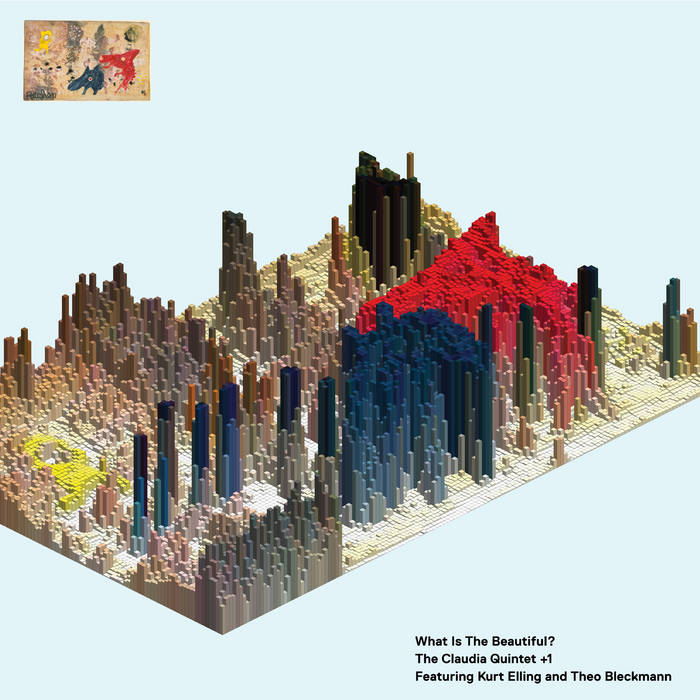 Cuneiform Records offers a very generous program where a release from their back catalog is offered for $5 ($7 for a double album release), and they don’t skimp on the quality of these releases.

Drummer John Hollenbeck’s The Claudia Quintet released this disc in 2011, and as a Rock-In-Opposition / Avant-Progressive / Spoken Word release, it holds together beautifully.  Collaborating on this album are Kurt Elling, one of America’s finest jazz vocalists, and Theo Bleckmann, one of Germany’s finest singers.

From the Cuneiform Bandcamp site:

For their sixth album, What Is The Beautiful?, The Claudia Quintet brings together the acclaimed compositional approach of leader John Hollenbeck with two of the most important male singers in improvised music, Kurt Elling and Theo Bleckmann. Elling and Bleckmann recite and sing the poems of avant-garde/proto-beat American poet, Kenneth Patchen, an innovator in his time.

“Claudia with vocals?” Yes, Claudia with vocals, and it will probably not surprise anyone who has followed this much-loved, one-of-a-kind ensemble that that it still sounds completely like Claudia…but different! Kurt Elling, probably the most popular male jazz vocalist today, brings to these words – words which are, by turns, funny or poignant or thought-provoking – a hipster swagger somewhere between Ken Nordine and Tom Waits. Theo Bleckmann is, as always, Theo Bleckmann; one of the truly singular and distinctive singers in jazz today. Having both vocalists on board, with their radically different styles, was a brilliant move and gives What is the Beautiful? an tremendously wide sweep.

Formed by composer / drummer / arranger John Hollenbeck in 1997, this NYC ensemble’s sound explores the edge without alienating the mainstream, proving that genre-defying music can be for everyone. Over the past decade, the group has released CDs that are critically acclaimed world wide and whose appeal extends well beyond, as well as including traditional jazz audiences. The Claudia Quintet has amazed audiences from Alabama to the Amazon. Their unique sound has inspired dancing hippie girls at a New Mexico noise festival, the avant-garde cognoscenti in the concert halls of Vienna and São Paolo, and a generation of young musicians worldwide. In the course of the thousands of miles they have traveled together and hundreds of concerts they’ve played, the Claudia Quintet has evolved and grown, developing a dynamic live sound based on trust and spontaneity. They bring this powerful energy into the studio, where they record the old-fashioned way, live, playing as a band.

As on their previous album, Royal Toast, the Claudia Quintet is again supplemented by a +1, in this case Philadelphia-based pianist Matt Mitchell. His virtuosity and spontaneity make him a perfect fit with the long-running core group – Hollenbeck on drums, Drew Gress on bass, Matt Moran on vibraphone, Ted Reichman on accordion, and Chris Speed on clarinet and tenor sax.