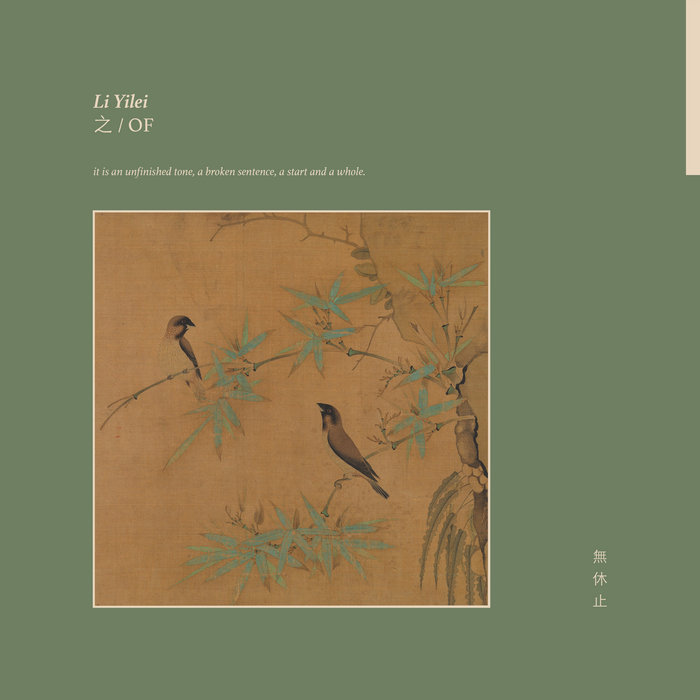 Li Yilei is a London-based sound artist based whose roots are Chinese.  Li’s latest album, Of (Chinese: 之) reminds me of some of the amazingly good Japanese new age ambient releases of the 1980s which seem to be gaining a lot of attention like Hiroshi Yoshimura and some of Haruomi “Harry” Hosono’s more eclectic albums outside of his work with the Yellow Magic Orchestra.

The instrumentation consists of analogue synthesizers, vocal samples, field recordings and string instruments such as the violin and guqin (I was introduced to the instrument while teaching in China back in 2018), and Li is also influenced by art of the Song Dynasty.

According to Li, “I tried to portray each song as a short, scattered poem – a moment that I captured to represent each hour.”  The 12 tracks are snapshots which flow elegantly.

Also, notice the artwork.  The Song-era Emperor Huizong whose reign took up the first quarter of the 12th Century, was a poor administrator but an astoundingly talented man of culture.  He reminds me in some way of Alfonso X “El Sabio,” who was seen in the same light, and was more-or-less a contemporary.  The cover art is his painting, titled ‘Finches and Bamboo’, and it adorns the album cover.

There is nothing saccharine or overly dark about this album.  It is one of the warmest and most enveloping pieces of music I’ve heard in some time.  I look forward to hearing much more.